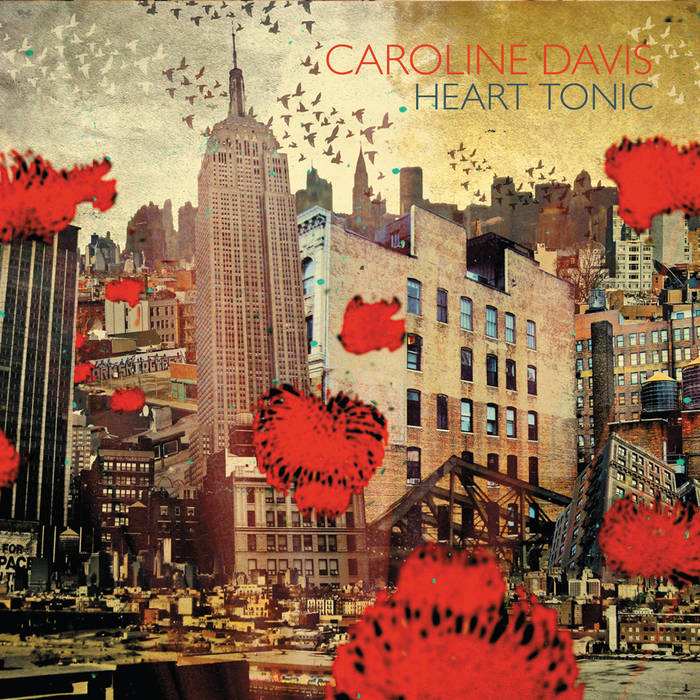 Jeff Kliment A tonic for the heart, indeed. I feel better already.

For the past four years, saxophonist/composer Caroline Davis has been tied up in matters of the heart. Her focus is multi-tiered, however. There are the metaphorical facets, including her feelings about her recent relocation to New York from her longtime home in Chicago and the emotional rigors of navigating the path of an itinerant musician within the City’s bustling jazz scene. There is also a more physiological aspect, as Davis has actively researched the life giving organ and its properties in dealing with her father’s own heart ailment. All of these forces come to bear on her new recording, Heart Tonic.

Born in Singapore to a Swedish mother and British father, Davis grew up in the United States from the age of six, settling first in Atlanta, then Texas and ending up in Chicago, where she attended Northwestern University and received a Ph.D in Music Cognition. It was in Chicago that Davis became engrained within the local jazz and improvisatory music community, one that is tight knit, diverse and particularly open to each player’s musical inclinations.

Davis’s Chicago experience was instrumental in her development as a player. Regularly hearing local greats, like saxophonist Von Freeman, guitarist Bobby Broom, and pianist Ron Perrillo, playing in wide ranging musical contexts and interdisciplinary collaborations helped to shape her into a well balanced and genre defying artist. Davis was also privy to a range of artists, including one of her biggest influences, the iconoclastic composer/conceptualist Steve Coleman.

Upon her move to New York City in 2013, Davis found herself as an outsider looking in. It was difficult to come from a place where she was established to an entirely different community, especially one as fractious as New York’s. Though, Davis soon showed that she was equal to its demands.

The roller coaster lifestyle of working as a professional musician in New York was challenging. Davis quickly saw that her days would have some career highpoints alongside humbling lows of everyday musician life. Friends like drummer Jay Sawyer helped her overcome her blues by coming along to sessions and gigs, thus helping establishing herself in the scene. Soon, Davis began to play more regularly with a diverse group of musicians, including Matt Mitchell, Greg Saunier, Billy Kaye, and Curt Sydnor.

It was about this time that Davis found out that her father had heart arrhythmia. The news prompted her to do detailed research on the physical aspects of the human heart.

It was with all of this in mind that Davis decided to compose this music, using the heart for its emotional connotation or utilizing ventricular rhythms as metrical devices. Composing helped not only in her emotional transition but also focused her study on biological aspects of the body. Heart Tonic finds Davis employing more standard jazz elements than in the music of her previous work, including formal harmonic changes and shifting meters.

To assist in the recording, Davis employed a brilliant ensemble of young musicians, more aligned to swinging, straight ahead jazz, but who could also handle the challenges the composer posed for them in her idiosyncratic music. Pianist and keyboard player Julian Shore and percussionist Rogerio Boccato had been friends with Davis since her time at Litchfield Jazz Camp nearly a decade ago. Trumpeter Marquis Hill is a Chicago contemporary and a perfect foil for Davis’s lithe alto. Originally from Israel, Tamir Shmerling is unwavering on acoustic and electric bass, while longtime friend and drummer Jay Sawyer always insures the music is remarkably propulsive.

The recording begins with the churning “Footloose and Fancy Free,” a piece that relies on a cyclical bassline echoing the cycle of the heart’s superior and inferior vena cava leading to the brain and back but with an unconstrained melody singing above that anchor. The plaintive “Loss” is an introspective and emotional piece that was written quickly after a truncated musical connection in Chicago after Davis’s move, featuring Rogerio Boccato on percussion. The swinging “Constructs” is a suite concerned with the insistency to make up words for the intangible, like using “heart” as a metaphor for honesty, bravery or sympathy. The waltzing “Fortune” is a thankful tribute to the new people and projects Davis has been involved with since relocating. It also features Benjamin Hoffmann on organ. “…TuneFor” is a drum feature for Sawyer stemming from “Fortune.”

Wayne Shorter’s “Penelope” lent itself to the project as its heart beat like pulse is reminiscent of the rhythms her father’s arrhythmia was making in his own heart. Originally written for another album, Davis rewrote “Dionysian” in New York with a new mindset eschewing the filters of frustration that had limited her on her arrival; it provides an emphatic proclamation of place. The haunting “Air” floats on a bassline in 7 while the rest of the instruments play in 4, thus generating an ambiguous but stable cycle and bedrock for Shore’s lovely piano solo. The stirring “Ocean Motion” closes the recording with a piece in 9/4 in three sections, which leaves the listener with a healing final melody and incendiary drum solo.

Caroline Davis’s new Heart Tonic is a moving and pulse livening journey through Davis’s emotional relocation from Chicago to New York and her investigation of the biology of the heart.

Featuring Oakland sounds from the Smart Bomb collective and Samplelov.